I wanted to find a classic truck between 1950 to 1966. I was leaning towards a Chevy. Then I saw this old panel truck for sale and it was not even close to what I was looking for. I told the wife hey we have to look at it. She said, I thought you wanted a truck so you could haul something in it, and it’s kinda ugly. Oh come on, for grins and giggles? Okay fine she says. When we got there I looked it over really well. Always in my life time when it comes to vehicles I always wanted something different than everyone else. So I just had to have it. California truck and the previous owner said he kept it garaged. Not a speck of rust on it anywhere. Straight clean truck. It’s a 1958 Ford F100 Panel truck. It has the 3 on the tree with the original 223. motor (known as the ‘Mileage Maker’ back in it’s time) and all original drive-train. It’s got the old granny gears. She’s like driving an old farm truck. This is why Ginger gets the nick name Ol Slow Poke.
Now some history on the panel truck. Panels are kinda rare to see these days. This is a 3rd generation Ford truck. In 1958 Ford built 6,560 Panel trucks and they Built only 592 Custom cab panels, which this is a custom cab. Most panels came with no spotlight or only one. This one came with 2 factory spotlights which makes this truck a little more rare as well as the additional chrome that one could special order from. This is also the last year of the hump-top design making it even more rare to find these days. These panels were made for commercial use, deliveries and such. Farmers used them for transporting their produce to town to sell. Often you might have seen one on the side of the road selling fruit and veggies out of them. Some of these panels were also used as Emergency vehicles such as ambulances and Fire dept.’s used them as well. With this panel having to spot lights we think it was used as an Emergency vehicle.’
When I bought this panel off the old man who had it he used it as a work truck for his clock business. On the side of the truck it said The Clock Man Quality Service and Repair and she had a hideous interior. It looked like some got in their garage and made homemade panels and wrapped them in an ugly 70’s tweed, I told the wife, first chance I get I am putting a new interior in it. I was thinking a grey or brown to go with the orange color. As much as my wife hated this truck when I bought it she jumped on board when it came to picking colors and fabrics. Purple. You have to put a purple interior in it. Really? Purple? Well, as you see in the pics Purple really pops off the orange. Now when I think or talk about maybe trading it or selling it she gets mad and threatens me not too. She loves the Ol Slow Poke now. The first hour we had it a dozen or so people at the first car show asked if I could work on their clock for them, one guy took off his watch and wanted me to look at his watch. Sorry I’m not the clock guy. So the next day i took off all the vinyl decals for the clock man. Then I thought that’s a lot of real estate to leave bare so I wanted something clever to go with what these trucks were used for since younger generation didn’t know and something to go with it being a slow going truck. So I came up with ‘SLOW POKE DELIVERY’, Whatever~Whenever, it Gets there when it gets there. I have her car show quality, and have taken her to many car shows in the past couple years of having her and have won a few Best in Class awards, People’s choice awards, and most recently best interior out of 400 cars that were registered that day. It was in a local Motorsports calendar this year in the Sept.issue. Also, this year my panel truck was on the dash plaques and award plaques for a car show. 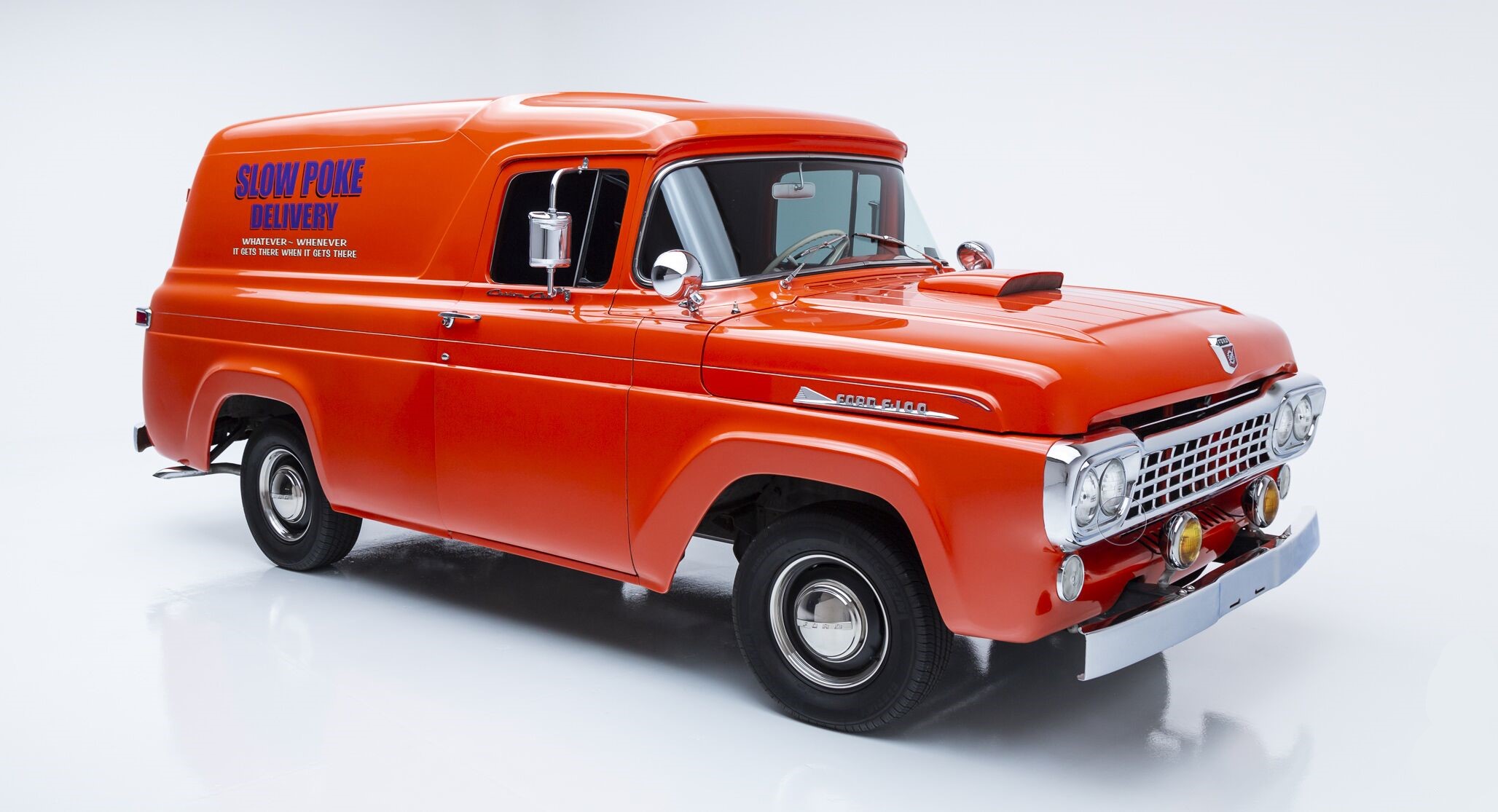