Originally this was a company service truck, utility body and all.  It’s been in my neighborhood since 2012, just sitting.  It’s still got a 2012 sticker on the windshield.  My first neighbor got it from one of his plumbing employees.  He used it for a short time until it quit running.  So it sat on the side of his house for about five years.  Then my very good friend, and another neighbor of ours, bought it and it sat at his house for almost the same length of time.  At the end of 2021 or so, he got it running.  It ran like a beast seeing how it’s got the 7.5 gas engine.

I grew up in the new and used car business in El Paso , Tx.  We dealt with these kinds of company trucks for years.  Back in the ’80s and ’90s, you couldn’t hardly give a utility truck away.  The first thing my older brother and I would do was have the utility body removed for $50.00. Then we’d go to the salvage yard and buy a good bed and all the hardware for about $350.00 dollars or so.  A lot of times they would deliver it also, same price.  We would install the bed ourselves, hook it all up, and check the whole truck out top to bottom.

My dad was a stickler for honesty, and being up front with our sometimes second and third generation customers.  That’s always been hard to find in the car business new or used.  We would put tires, upholstery, paint, the trucks would get whatever it needed.  We were proud of what we did and we did it fairly.  My dad Harvey and myself and my two brothers (Duane and Kevin).  We worked together for more than the first half of our lives.  I’m 63 now.  It’s hard work.  But if you worked for Harvey A., that’s the way it was.  The main thing is he was fair but tough.

Back to today, when I first took a really good look at that truck, I knew I had to go for it.  I pulled the utility body off with my buddy’s help.  He’s the one that sold it to me. I bought a bed and doors.  It’s not a frame-off job.  I cleaned and painted the frame flat black.  Everything will be new, ground up.

The point of this story is that my older brother Duane has been gone since ’98.  He had a 1968 F250 Camper Special 390 automatic, with air conditioning.  It was Caribbean turquoise and white.  It needed a transmission.  After he died, my dad gave it to me.  Things happen and things change and I had to sell it in 2011.  It broke my heart.  My other brother Kevin still lives in El Paso and sees that truck now and then.  I am going to make this truck a mirror image of my brothers truck, color and all (with some upgrades).  It’s in my driveway under my carport.  I’ve had it for about four months now and moving right along.

Thank you for allowing me to tell my story up this point. 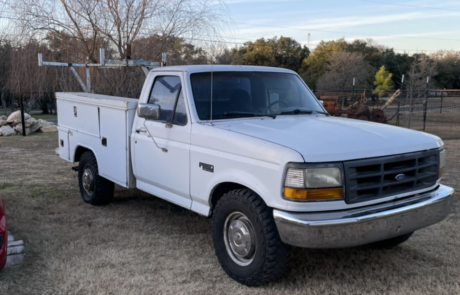 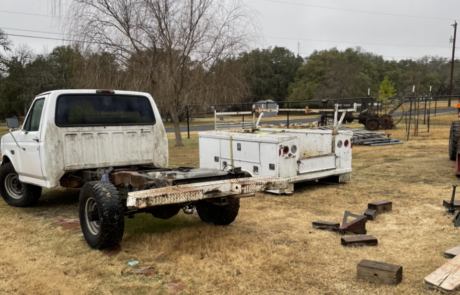 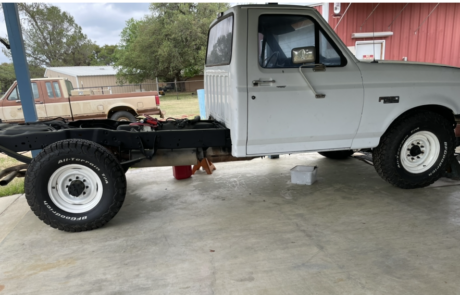 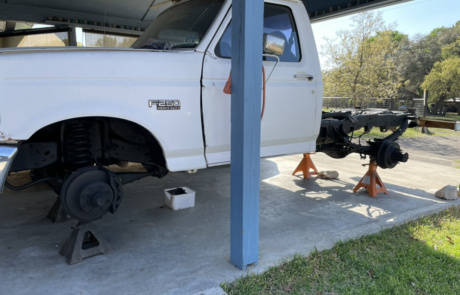 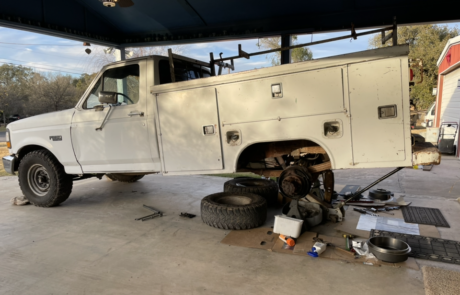