I bought a ’68 Chevy Stepside Shortbox 2WD off of eBay in 2010.  The truck was in Tulsa OK, and I’m from Edmonton, AB.  I flew down to Tulsa and bought the truck.  It was redone with a 383 Stroker in an engine bay that looked brand new!  It had a nice body with a so-so paint job and a real cheap looking recovered interior.  However, it was clean so I bought it and started driving back to Edmonton heading for Minot, ND.  The differential was a 4:09 posi, so top speed was around 55 MPH.  It was gonna take a while to get home.

Well, coming into Salina, KS the 4:09 packed it in.  I made to an O’Reilly Parts place and asked them about a good shop that I could see about the diff, and a couple of housekeeping items.  They recommended Gordine Auto Service, and told me to talk to Mike.

We had a meet and greet and I wasn’t expecting quick service, so we agreed to an Auburn diff, and those housekeeping issues I mentioned, and I would come back when it was ready.

I mentioned to Mike that I would like to get an original interior put back in the truck, but did he know anywhere I could get anything.  But, Mike mentioned LMC Truck.

I went in search of a Greyhound and was advised there was no Bus Service out of Salina and no airport.  The cab driver told me someone was starting a Bus line and took me to a service station and they had a bus making its first run at 5:00 PM.  I hung around for a while and a bus showed up.  It took me to Wichita at no charge!  First week was no charge fares and I was the first passenger, and the only passenger.  Finally, I got back to Edmonton on several planes.

When I got back, I looked up LMC Truck, and it was like Christmas.  They have so much stuff.  Free delivery in the States.  So I ordered new door panels, steering wheel, horn button, cigar lighter, seat cover, kick panels, vent panels, and a dome light cover.  And it was Free Delivery to Gordine Auto Service.

The parts were less than a $800, and with a new diff, fixing the electrical issues, and a complete service, along with installing the new interior panels,  Mike’s bill was under $2000.  When the work was complete, Mike lined me up with a transport company that delivered my truck to Lethbridge, AB. 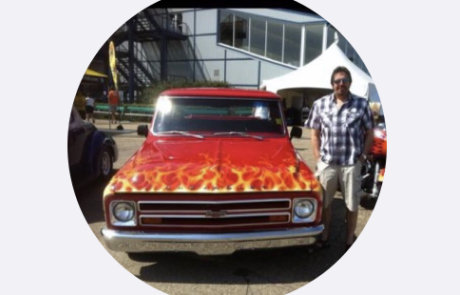