So my story started as many do.  My dad had a truck like this one it was rough but me and my dad reconnected after many years.  My dad was a drug addicted growing up through my childhood and not a good person, but that is why I became the man I am now.  I changed the future for my son and became a police officer.  I went the opposite way.  This is what change life for my dad.  He was so proud that he cleaned up his life.  We worked on his truck and became close during about a year, and he ended moving back to Michigan to help my Aunt, but ended up selling the truck.  At the time, I could not afford to buy it.  But he moved back to Tennessee to be closer to me as I had a son and he could do no wrong in my dad’s eyes.  My dad always got my son small cars to play with and my son has the best memories of him.  So again, I work for a small sheriff department in East Tennessee and was helping to do some work with a friend who lays flooring when we went out in no-man’s land and a guy had a truck like my dads.  But it was the only Chevy on the property, but was sitting there for about 18 years.  After telling him my story, he sold it to my son.  Now me an my son are doing the same thing, we’re connecting while building a truck in memory of my dad.  My son is 13 now, and there will be a lot of parts from now until he’s 16, but I would not trade it for anything in for the whole world.  My dad passed away a few years back, but I know he is smiling down on us. 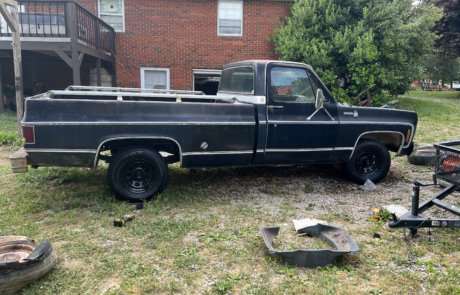