I bought this suburban on the last day of 2004, I tell everyone this is my mid-life crises car, not the bright red Ferrari, but a victory red suburban. I was only 49, which I do not consider mid-life, 50 sounds more like mid-life. I needed to down size the number of cars I had. As a single guy, with no kids, or dogs, did I need three vehicles. I had a small 1983 GMC S-15 pickup I got when my father past away. A 1985 Volvo 245 station wagon that was my mothers, before she pasted away. And, as my buddy called it, the “date night” car, a 1985 BMW 635 CSI. The BMW was the keeper, so I needed something to replace a pickup and a station wagon. A suburban. Started looking around, spotted this one sitting on a lot here in Fresno, looked around some more, but this one was red. I like red cars, so I bought it.

The body was in good shape, mileage was higher than some others I had been looking at, interior was in good shape, and there were no obvious mechanical problems. I have been working on cars and truck since 1973, that is how I earn my money, so any mechanical problem I was sure I could fix. When I bought the suburban the gas tank was empty , so the first thing I did was head over to the gas station to fill up the tank. This was back in 2004 remember. So I start pumping the gas, rolls past 30 gallons, I was expecting this, a friend of mine had a Tahoe, I had used it and know these had big tanks. The pump goes past 35 and still going, I am thinking big tank. Hits 40 gallons and I am looking on the ground to make sure I am not dumping gas on the ground. At 43 gallons I stop. Fuel gauge close to full. I order an owner’s manual, did not get one with the truck, and find out the suburban has a 45 gallon tank. Some gas station around here shut the pump off when you hit a certain dollar mount now, but gas was cheaper then, it has been going up over the years.

Got the suburban home, put some tires on, checked everything over, looked like it had been maintained over the years, maybe used to carry the family around. It needed to be cleaned, inside and out. Like take the seats out and cleaned. After many weekends of cleaning, scrubbing, polishing, pressure washing, new tires, shocks, spark plugs, filters, oil change, and a much more though going over I was happy with my new truck. This is a two wheel drive, with the little 15 inch wheels, but with the cargo doors in the back, third row seat, and rear A/C heater. This is a city truck, with the occasional long distance road trip. The big gas tank it makes it ideal for long road trips. Well, when gas was cheaper. So the suburban became my daily commuter,(I only live 6 miles from where I work), the grocery getter, the people mover, taking the guys to lunch at work, the groups of holiday revelers along Christmas tree lane, the mobile tool truck when working on race cars at my buddies garages, and when I got the two dogs, the dog hauler.

The first thing I did was remove the wheel arch trim and the black trim along the body line on the sides, and install a smooth front bumper. After a few years it was time to do a little something more to the suburban. Up until now it was stock. The suburban was looking good, but stock. Needed to make it more my own. Two inch drop front and rear. Not only did it look better, but was easier to get in and out of. After that I started looking around at wheels, what king did I want. Smoothies, a set of Wheel Vintques smoothies, powered coated in red, with chrome center caps and street rod trim rings. Now it was looking good.

I was checking my records and it showed I bought the suburban with 108,000 miles, it now has 191,000 plus miles. Over the years’ I would say I have done nothing other than routine maintenance and repairs. By that I guess I mean the engine and trans have not been touched internally. All cars and trucks are going to need some kind of repairs. Over the years I have done intake manifold gaskets, water pumps, rear axles and wheel bearings. Brakes, radiator, the broken window when my brand new battery got stolen. Over the years it has been a fantastic truck. Race weekends in Long beach and at Laguna Seca, going to the beach with the dogs in the back, bringing landscape rocks home from the nursery, one to two inch rocks in five gallon bucks, they were a deal. I have up graded some items, LED tail lights and interior lights, HID head lights, ceramic brake pads, and Bilstin shocks. And there was the $500.00 inside review mirror. The auto dimming feature was not working.

The couple of times I did take the suburban off road, was to my coworkers cabin in the mountains, at a place called Central Camp above Bass Lake here in central California. The way to get to the cabin is up the old logging rail road road bed that served the saw mill that was at Central camp many years ago, which is dirt now and not real well maintained. Took me an hour to go 12 miles to his cabin from the paved road. The first time we made it to within a half mile or so before my dog and the time Lotus, I was down to one English setter, could not take it and throw up in the back of the suburban. Not to worry, Weathertect rubber cargo mate. The next time Lotus and I were putting along in second gear to better maintain speed, when we were passed by mountain bikers. Dust rinses right off when your truck has a good coating of wax.

I have owned the suburban longer than any other car, I still enjoy working on it, I do all the work myself, I still like it, it is the everything go to vehicle. And it is Victory red. I like red cars. And it looks good when it is clean and shiny. 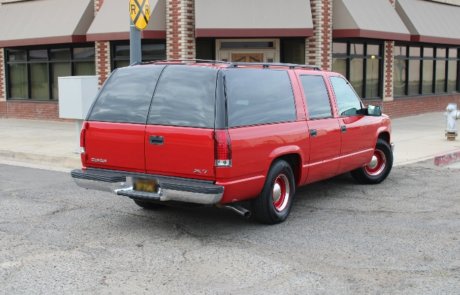 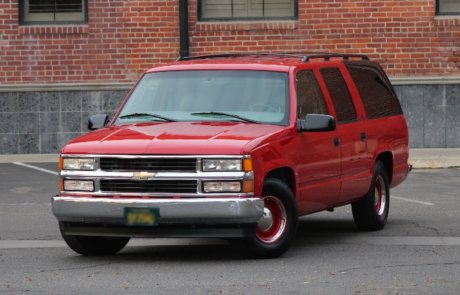 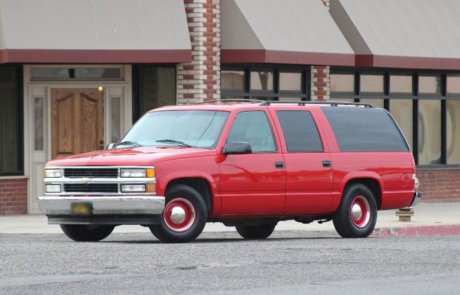 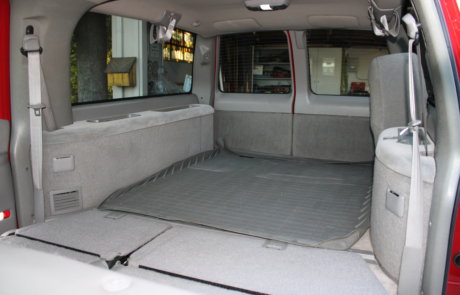 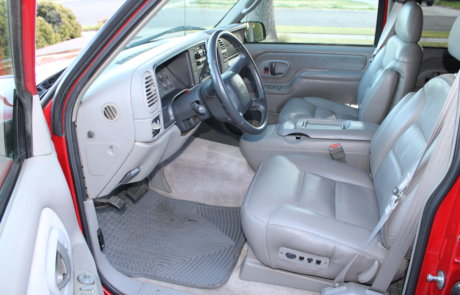 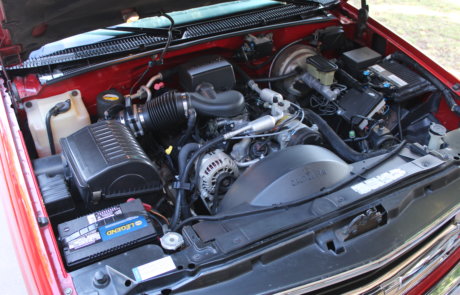