With the popularity of the ”little red truck” phenomenon, I was telling my husband, “wouldn’t it be nice to own one of those cool old trucks?” He gave me his usual “yeah, yeah, yeah” and a roll of the eyes. Little did I know, that he would be keeping his eye open for a deal. A few months passed, and he surprised me with a questionable buy. He ran into a gentleman driving a 1960 Ford F100 at the corner store. John, my husband, had known him for a while and of his truck. On this day, John had asked him if the truck was still for sale. The gentleman hesitated, but insisted that his wife was tired of the ongoing project it had become. He was willing to sell it, and we bought it. The truck was in rough shape but was mostly original.
So, let the project begin! My sons, Kole and Kyle, along with their dad began the painstaking process of taking it all apart, piece by piece. When I say piece by piece, I mean literally every bolt in that truck came out. The engine was removed and each piece was taken off to be sanded and painted. A frame off restoration was started. Kole was trained in auto body restoration at Vo-tech in High school and also has a two year degree from Baker College in the trade, so he was mainly in charge. He and his dad worked consistently every night for about a year to get every piece just right. Kole did all of the painting, with a little help from his buddy Chase. While Kole and his dad did all of the prep work and sanding, Kyle was there occasionally to help with getting things welded back together correctly. All the rusty metal pieces were removed and replaced with new metal.
After about a year, the truck was looking like her old self, only so much cooler!! It was so, so much work, but the time spent together between father and son was priceless, and the memories will last a lifetime. Also, not to mention the fact that they did it all for me, Mom, just melts my heart. Now I have one of those priceless old trucks to ride around in and share with my grandchildren. We love it.
It is a 1960 Ford F100 with a 223 6 cycle or a straight six engine. Thanks to LMC, we were able to get a lot of the parts we needed to make the build work the way we wanted it to be. Finding parts for a 1960 Ford truck are not that easy to find. So thanks LMC for having what we needed!!! The color of it when we bought it was black (painted with spray can paint). We changed her up to black cherry pearl on the paint job with a contrasting gun metal gray on some areas. Kole highlighted the Ford letters on the tailgate in the gray and used it on the wheels, the grill, the engine, the transmission, the headlight inserts, inside the door panels and some on the dashboard. He also spray coated the bed lining with the gun metal gray.
For the first ride out of the garage, Kole asked me to hop in and go for a ride. So we did. After driving around a bit, Kole asked me if I wanted to drive it. I said yes sir!! So getting in the driver seat, manual shifting on the column and no power steering was a little tricky, but guess what, Mom pulled it off without stalling it at all. We get back to the garage and Kole tells his dad, “Hey, Mom can drive a stick!” I laughed out loud, he truly didn’t think I knew how to drive a stick at all…….kids!! My daddy taught me how to drive a stick years ago!! It is truly one of a kind, and all mine. They did an awesome job, thanks guys!! 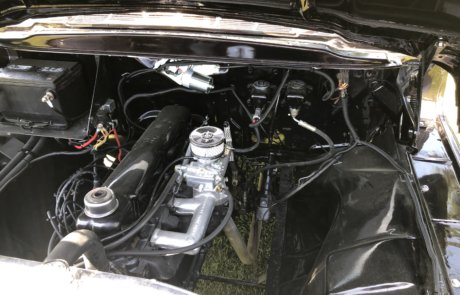 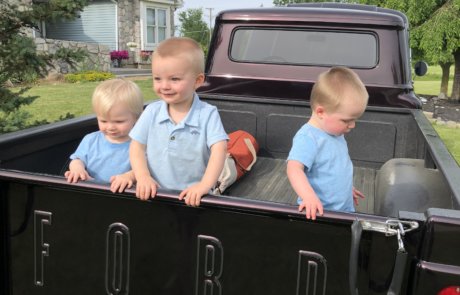 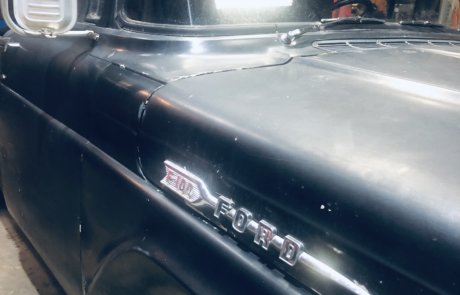 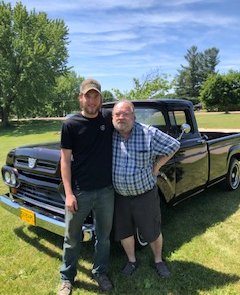 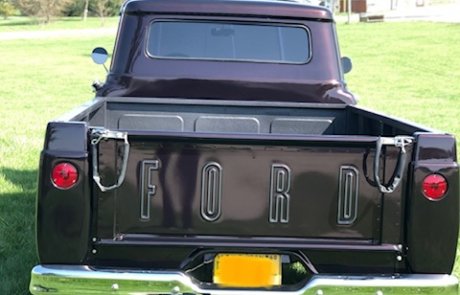 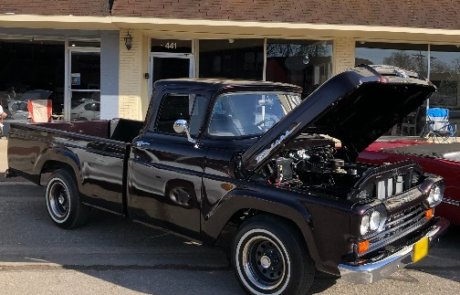